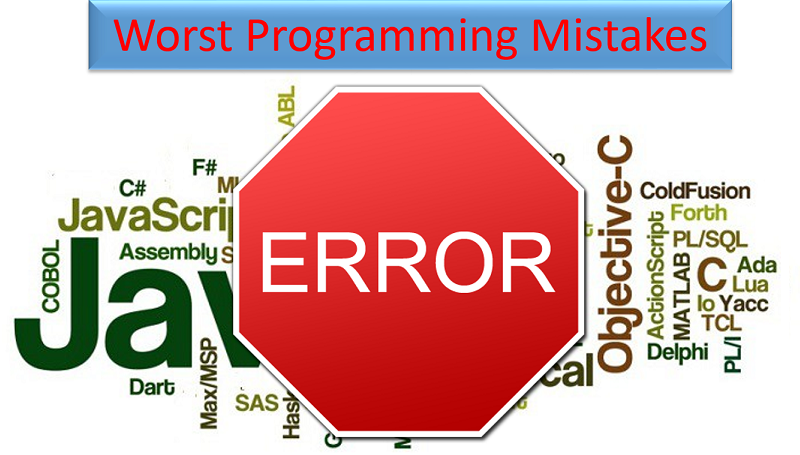 With the advancement of technology we can clearly see that from healthcare to telecommunication and space travel everything is dependent on Computer. Although, the modern computer arrived in the 1940s it has covered almost everything in our daily life. The rich history of computer couldn’t be impeccable as have some worst programming mistakes, which halted the usual life and caused monetary loss as well as people’s life. If, you are in IT you know why most of the Software Engineers are frustrated in their life. But, the minor mistakes done by developer in the code caused disaster on a major level and cost people their life as well.

Here are the 5 worst programming mistakes in history.

The Y2K Bug (Year 2000 bug), which every 90s kid might have heard was the talk of town for every IT person or common people. If, not resolved on times it could have caused the major setback to the computer system across the world. As, in the 90s, most computer programs had shortened the four digit of year abbreviation to two digit actually to save valuable memory. For example the year to read 1990 as 90 and 1991 as 91 and so on. But, when the year 2000 was about to come programmer realised that computer is unable to recognise as it will be read as 00. Adding to the problem this was also a leap and certain software didn’t have the proper coding to account for the extra one day.

I remember when I was in my high school and we already had our hands on the computer this was the topic shared by our computer teacher. At, that time many feared that Y2K could bring down the complete computer system across the world. But, luckily all the computer programmers worked hard to update the computer apps. It cost roughly $300 throughout every industry for the fix. So, actually nothing happened and life proceeded as normal but with the huge monetary cost.

The reason I have put it in top is that although it did not impact the computer system but panic was extremely high not within IT industry but for every person either related to industry or not.

The Therac-24 radiation therapy machine caused radiation overdose and resulted in killing at least six patients. Upon investigation the finding discovered that the overdose caused by a software glitch. The insufficient system development and poor software was a result of programming mistake that costs people life.

Since, this was a result of human error while coding it is a reminder that code should be written in such a way that it can be easily tested as the machine issue real cause was difficulty in performing automated software tests.

I considered as one of the worst programming mistake because it’s not only have resulted the programming error or system down, but caused the loss of human life.

3. Day of the Living Dead

In 2003 St. Mary’s Mercy Medical Center in Grand Rapids, Michigan, Patients Management System reported that 8,500 patients are dead. It was later discovered that the software glitch in the system incorrectly generated that report but at the time it caused super mayhem. As, getting the news of death about your family/friends is the saddest news that one can hear. Most of the Patients in fact got the report of their own demise which was really discomforting when you are particularly alive. This disaster was harmless unlike Therac-25 because it did not actually kill any patient but generate the wrong report. This software mistake is huge because the news was not only limited to patients and their families but the correspondence went out to insurance companies and Social Security offices.

Since, Insurance providers and Social Security ensure eligible patients have Medicare the news caused a big problem.  Later, St. Mary’s Mercy informed patients, insurance providers and government agencies about the software glitch. Although, the patients actually did not die but the news created a lot of trouble for the patients and their families and the damage control of ensuring continued healthcare coverage was a mess.

These programming mistakes gives us the lesson of being more cautious while developing any software. Because, although these software aims to automate process and makes like simple the result should not be something that bring trouble at place of of peace.

Every online game player knows what is is World of Warcraft. This game once suffered a different kind of computer virus in 2005. A virus called as Blood virus emerged as digital plague that infiltrated a few game servers and killed thousands of characters. Hakkar, the god of Blood which was intended to afflict players withing proximity to Hakkar’s body actually infected characters with corrupted blood. The player-to-player transfer of this blood virus occurred outside the realm moreover, non-player characters (NPCs) became carriers.

The first infected server was Archimonde which caused the death of Low level characters instantly. The powerful characters also didn’t last much longer. Although the virus wasn’t planned to be released outside of Hakkar’s kingdom, the programming mistakes which caused a coding glitch perpetuated the virus via NPCs and pets. Blizzard rolled the server restarts and somehow fixed the blood virus, but thousands of player character corpses littered the World of Warcraft landscape. Although, this coding glitch did not actually kill anyone in real or caused financial loss, but it affected the online games as they take their entertainment very seriously. And, also showed us what might happen if some glitch happen in real world how the outbreak and panic cause the collapse of complete civilisation.

So, Developers should put more focus while developing any application or while writing a programming should follow the basic Programming Principles to become a good Programmer. Moreover, thorough testing is required before release of any such software.

We are not expecting the disappearance of Programming mistakes anytime soon, as it is there since the inception of coding. But, there are several programming mistakes in the history from where we can learn and stop repeating these mistakes.

We would love to know about any other historical examples of bad code that you remember and want to share with us? Also, leave comment about your programming blunders that you have done in your career.

You may also like our Programming section, to know more about IT engineers, but this section cover real work.