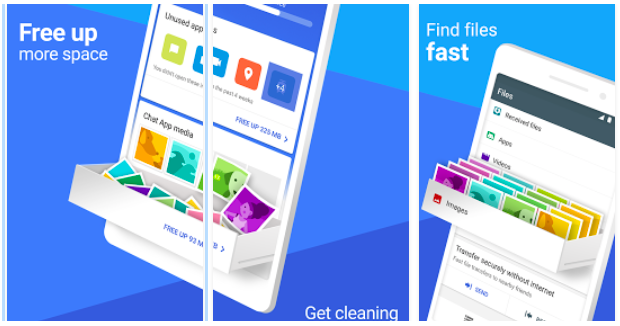 Although the Google Files Go is meant to rearrange the files on your smartphone, the description of the app in the PlayStore says, “Files Go is a new storage manager that helps you free up space on your phone, find files faster, and share them easily offline with others”. It means that you in addition to the ability to organize the files, the app will also free up the space on your phone.

The app which is said to occupy only less than 6 MB of storage will definitely win the hearts of the people, because who wouldn’t love a lite app which will let you arrange files and free up space. Additionally, the Files Go also offers offline sharing which is secured with WPA2 encryption to ensure a secure file transfer.

It lets you to view the amount of storage used and left in the smartphone. You will also be able to share apps, documents, videos or pictures with others who also have the same app installed on their smartphones. I’m sorry, are we really reading the end of apps such as ShareIt and CleanMaster? Share us your views on that in the comments section below.

For your convenience, we are sharing the link to download the Google Files Go app here below.