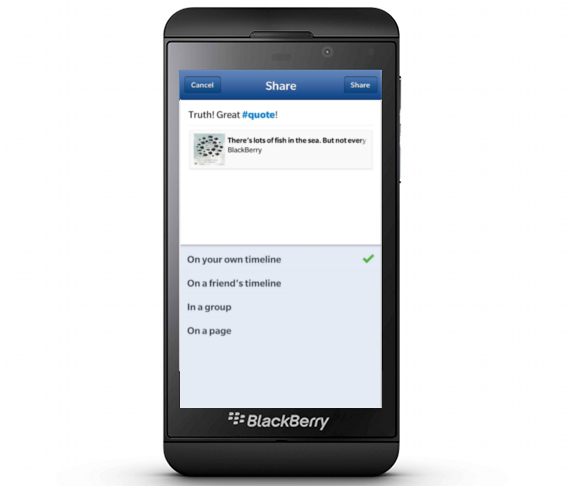 Facebook announced that it will stop supporting its app in the Blackberry OS very soon. The company had earlier made a similar decision by stopping WhatsApp for the Blackberry users.

Facebook has decided to stop supporting the Blackberry OS and Blackberry 10 platforms. At the same time, it has also chosen to cease the necessary APIs for Blackberry which will eventually lead to the end of the support for even the existing app. The company came up with an update earlier this week that replaced the Facebook app with a simple web interface.

On the other hand, Blackberry has expressed their disappointment over the Facebook’s decision to stop supporting WhatsApp and Facebook in Blackberry OS. The company has also asked the users to come forward to express their concerns with a #LoveBB10Apps hashtag.

Blackberry itself had made its new strategy clear by declaring that it will release Smartphones with only Android OS in them. Therefore, we can expect several other leading developers to follow the footsteps of Facebook by abandoning the OS.

Do you think that the Facebook should have considered the users of Blackberry before going ahead with the current decision? Let us know in your comments. We would like to hear from you.

WhatsApp will cease support for few platforms by the end of the 2016.
Twitter to stick to its 140 characters limit, the CEO confirmed it.
Google Maps now allows you to label your favorite locations with stickers