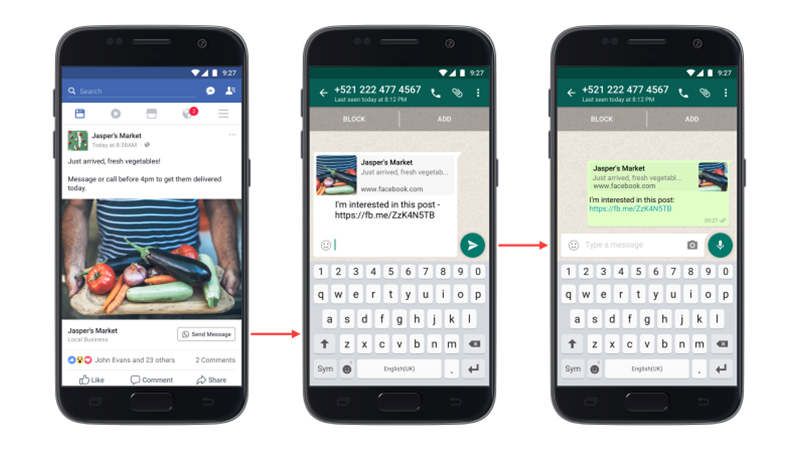 WhatsApp had clearly stated that its messaging service will not be flooded with Ads. However, this is not stopping its parent company Facebook to try other ways to introduce the Ad concept from Facebook to WhatsApp.

Today, the company is launching a new Ad unit which will let the advertisers create a link between both the platforms. For instance, the businesses who would give an ad here can add a button on their ads so that the people can message or call via WhatsApp just with the click of a button.

There were reports that the Facebook was testing this feature during the beginning of this year. Today, the social networking giant has confirmed that it is rolling the feature out on a slow pace first with North and South America, Africa, Australia and most of Asia.

One must notice that the Europe is not included in this list as of now. Anyways, the company might definitely introduce it there later. It looks like the Facebook is serious about trying this feature out only in the regions other than Europe first.

The company has also quoted that around 1 million pages on Facebook has already added their WhatsApp numbers in their posts every month. It means that the few businesses are already using the WhatsApp as a platform with the help of Facebook. In that case, the addition of this new feature will only benefit them.

Many people already use WhatsApp to communicate with small businesses. It’s a fast, convenient way to stay in touch. By adding a click-to-WhatsApp button to Facebook ads, businesses can now make it even easier for people to learn about their products, set up an appointment or use their service.

Share us your views on the Facebook’s plans to make money out of WhatsApp with the help of new ways of Ad Campaigns from Facebook to WhatsApp.