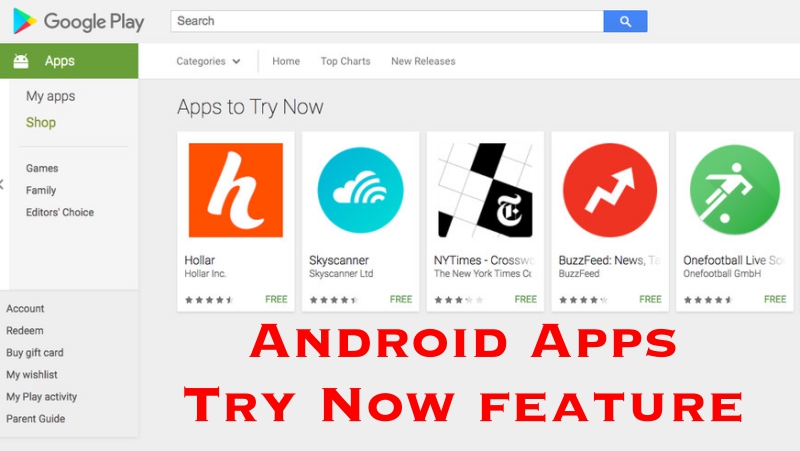 You can try your hands on the apps even before installing on your Android device. Yes, it is more like having a look at the dummy handset before you buy the actual smartphone in a showroom. To enable the same with the apps, Google added “Try It Now” button in the PlayStore. Currently it is available only for the supported apps.

The current list of supported apps include The New York Times Crossword, Red Bull, BuzzFeed and Skyscanner. By the time you read this post, more apps will have added the ‘Try it Now’ feature already. However, you can have a look at all of them by going to the Apps To Try Now page on Google PlayStore.

This idea of the search engine company was initially unveiled at the Google IO 2016. The basic aim behind this idea was to allow the users to try the Android apps even before installing the app on the device. Now that the Instant Apps feature is open to all the developers, this feature should be available to your favorite apps as well. It is just a matter of time till the developers of your favorite app implement this feature.

Our view on the Android Apps Try Now feature on PlayStore

This is going to be one of the best features that the Google has ever provided to its Android users. It gives the users an opportunity to know more about the app even before installing it. These days, you can see a lot of illegal apps making their way to the PlayStore. I mean, the apps might indicate it purpose to something, but in reality it does the whole other thing. And not to mention the pop-up ads that still keep popping up even after uninstalling the apps. We at TechDotMatrix believe that this feature will certainly bring down all such issues.

However, share us your views on the Google Apps Try Now feature in the comments section below.