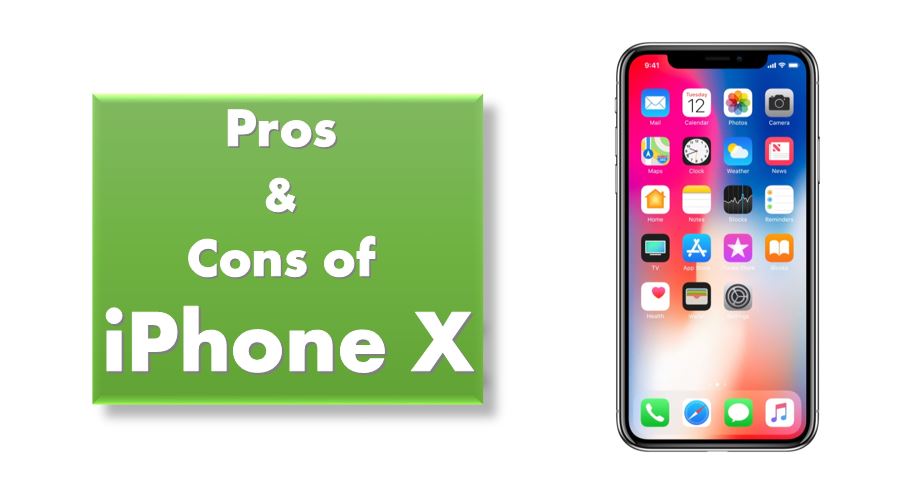 Are you here to know the latest iPhone X Pros and Cons? Let us find them out together in this post.

The launching events by a few tech companies often create a revolution for other gadget manufacturers to inspire and follow their trend. The Apple, Samsung, LG, HTC, and bunch of other companies like Sony fall under this list. These companies are capable of coming up with new features for the launches of their high-end smartphones. It’s been only a few days since the launch of the iPhone X and the whole world is going gaga about the smartphone. That’s why, here in this post, we will have a look at the advantages and disadvantages of iPhone X. And we will find whether the Apple has met our expectations this time.

We will have first have a look at the Pros of iPhone X.

You will get the latest iOS 11 pre-installed on the iPhone X smartphone. The iOS 11, which is the latest version of the iOS operating system is packed with additional features such as improved Siri, ARKit and much more. The augmented reality is going to become a reality in the iPhone X through the iOS 11 software version.

You will not have to worry about plugging the charger into any of the ports of iPhone X because the smartphone supports wireless charging. The device also comes with a thin sheet of graphite to protect the 3D sensor in it from the heat produced through charging.

There is no home button in iPhone X and its absence helped the company a lot to make the screen as much wide as possible. And moreover, the new way to launch the home screen using gestures is quite interesting.

In terms of design, the iPhone smartphones always get the top-notch features. This time, the Apple has decided to add the additional glass body on the back side as well to increase the premium look of the iPhone X.

The launching events of iPhone every year are known for being a platform for showcasing the revolutionary features which would later change the lifestyle of the mankind for the rest of years. This year, the Apple introduced one such a feature called the Face ID feature which will replace the existing Touch ID method to unlock the smartphone. And guess what, the Face ID will let you unlock the iPhone X in milliseconds.

The screen in iPhone X has got bigger and much better. The full HD OLED display will take your viewing experience to a whole another level. The 5.8-inch screen sports an edge-to-edge OLED display with True Tone technology.

The A11 processor will make the iPhone faster and better than ever before. It will, in fact, bring the augmented reality possible in the iOS devices. That being said, the developers will make use of this availability in the best way possible to deliver the AR feature in the apps.

The iPhone X is said to be water resistant. You can immerse the phone in a 5-feet depth of water for up to 30 minutes. But would you really dip your iPhone in water? We bet you won’t do that. Still, it is good to have this feature to know that nothing will happen to your mobile even if it falls into the water accidentally.

These are the advantages of the iPhone X. Now let us have a look at the cons of iPhone X below.

There is no IRIS scanner on the latest prestigious iPhone device. This gives an edge for the competitors like Samsung over the Apple because the high-end Samsung smartphones are equipped with this IRIS sensor.

The iPhone devices are always priced higher and only the richer people are the ones who buy this device the most. As usual, the price is very high for iPhone X starting from $999.

The iPhone X will be available in Space Gray and Silver colors. The company should have given a thought about adding more colors. Because there could be a few who don’t like both of these available colors.

The phone will have to be within a radius around the adapter to get it charged wirelessly. This is really an advantage, but it can also be annoying at times. Because we are expecting the iPhone to get heated during the wireless charging process. However, as mentioned above in the pros section, the graphite coating should also lower the temperature.

The FaceID is going to be a trendsetter, but it has replaced the existing Touch ID feature. We are pretty sure that it is going to upset a few souls who have been habituated to unlock their smartphones with their fingerprints. The Apple could have still provided the Touch ID feature along with the FaceID recognition.

The Apple killed the 3.5 mm audio headphone jack last year. The company is still following this trend in the latest iPhone devices which were launched in this year. Many interesting headphones are available with the 3.5 mm support. The users will have to rely on the connectors from the company or third-party sources to enjoy the music via the headphones that comes with 3.5 mm support.

You cannot remove the battery in iPhone X. You will not come across any situation where you will have to remove the battery, but in case if you choose to do so, you must know that there won’t be anyway. We will advise you not to conduct a postmortem on a thousand dollar gadget.

The Android introduced the concept of split tasking in Nougat last year. It is still disappointing to see this feature not included in the iOS devices even after one year which means that you cannot run two apps at once in the iPhone X smartphone.

These are the disadvantages of iPhone X.

Let us know your expectations or experiences by commenting in the comments section below. We’d love to hear about it from you.