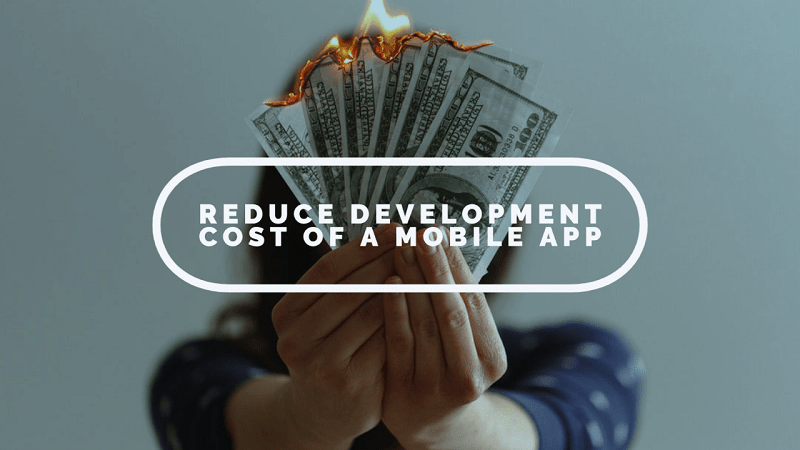 Here we are going to explain some of the proven and time-tested practices to reduce mobile app development cost.

But while going for a cheap bid, always make sure that you don’t need to compromise on the quality of development. Thoroughly in a gross measurement, outsourcing comes as a cheaper option requiring less investment, you must evaluate the qualitative parameters when choosing an outsourcing company.

This is true that native apps are always known for optimum performance in terms of speed and also in respect of integrating platform-specific features and functions, but building separate native apps for separate platforms always involves considerable cost. This is where cross-platform development comes as a better choice as it allows building apps for two or more platforms at the same cost.

These days, we have a number of great cross-platform tools that allow building almost native apps for multiple platforms with the same development effort. React Native and Flutter have come as two most impressive frameworks and programming languages to ensure smooth cross-platform development with optimum output. These new ranges of tools surprisingly provide a higher quality of user experience, just as native app development.

Since you have a mature and already robust mobile app space, there are too many great open-source libraries contributed by developers worldwide. These libraries provide you ready to use code and components for building different app features and functions. Instead of building an app from scratch, you can use these components and code and build the app faster and with less cost.

There are several repositories over the Internet for the developers to access open source libraries and components that they need in their projects. These pre-built elements help to boost the pace of development, and as a result, the development cost gets lower.

Minimum Viable Product or MVP is a great approach to build your app faster and at a lesser cost. The approach basically focuses upon building the app with basic and elementary features and a stripped-off user interface that provides the user what he needs.

Since this is a minimalist version of the app, it is developed and released in the market faster and is built with a minimum budget. Based on the user feedback for this basic app version, further value additions in terms of features and UI elements are planned and brought later on with updates. Besides saving cost, this approach also helps to validate the app and future value additions.

Now, let’s come to one of the key ways to minimize cost for creating the app UI. For building the app UI from scratch, there is a considerable cost. But by building the same app with a pre-built template, development cost can be largely reduced. While using such ready to use templates, you can always modify them a little as per your specific UI needs. You can find a wide number of third-party providers of pre-developed app templates like free app builder.

Similarly, for much functionality, you can just use third-party plugins that are available in the market. For example, instead of building a custom notification function from scratch, you can use some useful plugins from the market that allows you to build the feature faster and at a lesser cost. The only thing that you need is o remembers is that your chosen third-party plugin should be stable and error-free enough for the app project.

The testing of an app needs to get a high priority from any developer since any bug or app error can lead to a great reputation crisis for your app. At the initial stage of the development, any negative feedback can ruin all your efforts. This is why you should give optimum priority to mobile app testing tools and resources.

As for the best testing output, the agile method always comes as ideal as it involves testing throughout the development process instead of testing the product at the very end of the development cycle. Automation testing tools are great to make your job easier, but the actual user testing should not be replaced if you have scope and resources ready for the same. When it comes to testing, give your app the best input to ensure the best result.

Finally, for a mobile app project, the cost is a key consideration to stay competitive in terms of revenue generation. But cost alone cannot be the principal factor as no app project can undermine quality for the sake of cost advantage. The above-mentioned considerations can really play an important role in reducing the app cost without compromising on quality. We hope our suggestion on how to Reduce Development cost of a mobile app will help you.