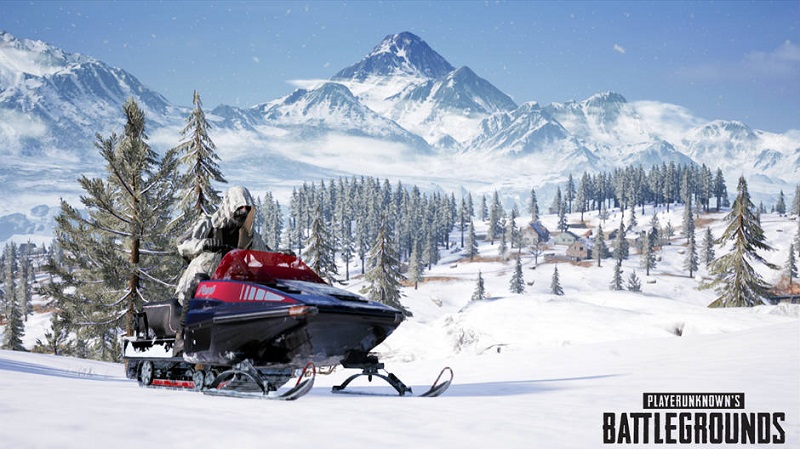 PUBG Mobile has dominated global gaming culture with exciting, last-player-standing action and per Google Play Best of 2018 Awards best game is PUBG. Now, PUBG mobile is getting a new version v0.10 update that will bring an all-new Vikendi snow map, a Snowmobile, a new weapon, and more. As, per current shchedule the v0.10 update will be available download on December 20th.

The update basically brings a new snow map, called Vikendi, which is a 6X6 map (sized in between Erangel and Sanhok).  This update also brings along cross-server matchmaking, which means players might be matched to players of the same tier on other servers. There are a new Snow weather mode and an exclusive Snowmobile vehicle. It also brings snowball Fight added to Vikendi’s Spawn Island. The main menu will also be themed after snow and players can collect bells from Classic mode matches and exchange them for rewards and the event center.

It is adding a new layout for players with large hands, a display for Crew Challenge winners on Erangel’s Spawn Island. Players that repeatedly exit matches right after starting will now be banned from finding matches for a period of time. Another important change is that players will be able to report other players while spectating after dying in a match. There will also be new commands added to the quick chat.

It is also adding Firearms Finish Upgrade System, where players can use materials at the Lab to upgrade certain weapon finishes getting additional kill effects, unique kill broadcasts, and death crate appearances. It is adding added Arabic support.

PUBG MOBILE brings a new snow map with the 0.10 Update
New Map and In-game changes:
• Vikendi, a 6km x 6km snow map
• Will be available for download at 0:00 UTC on 20 DEC 2018, and available for matchmaking 24 hours later
• New weather mode added: Snow
• Vikendi-exclusive vehicle: Snowmobile
• Snowball Fight added to Vikendi’s Spawn Island
• Added layout for players with large hands
• Added a display for Crew Challenge winners on Erangel’s Spawn Island. Season 1’s winning teams will appear on the Spawn Island of their respective server and modes (Season 2 registration starts at 0:00 UTC on 18 DEC 2018)
• Players’ best results in Crew Challenge will now be shown on their Crew pages and can be shared with other players
Thematic Changes:
• Added a Snow theme to the main menu. Collect bells from all Classic mode matches and exchange them for rewards at the event center
• Shop’s front page has been tuned to emphasize themes of each major update
Matchmaking Changes:
• Added cross-server matchmaking. After enabling, players have a chance to be matched to players of the same tier on other servers.
• Players that repeatedly exiting matches right after starting will now be banned from finding matches for a period of time.
Security Improvements:
• Players may now report suspicious behavior while spectating after dying.
Reward Improvements:
• Players now can collect all daily mission awards at once.
• Added Firearms Finish Upgrade System, where players can use materials at the Lab to upgrade certain weapon finishes to get additional kill effects, unique kill broadcasts, and death crate appearances.
• Added Lucky Treasure, a feature that gives players a chance to get upgradable weapon finish Glacier – M416 when they finish daily missions.
• Added Season spending rewards. Spend different amounts to get excellent rewards and steep discounts on firearm finishes
Other Improvements
• Added Arabic support
• Players now do not need to select a second language for matchmaking and chat
• Chat system now takes up less memory and stores more messages
• New commands added to Quick Chat

This new update is expected to hit beta soon and the stable update is rumored to arrive on December 20th and available for matchmaking 24 hours later.

Ahead, of Christmas this seems like a gift as now players can roam around on this map with a new Snowmobile vehicle as well engage in snow fight. However, the PC version of the game has already received the new map on its test server as well.

Let us know in the comments if you are excited about the new update to the mobile version or not. Stay tuned to our website for more NEWS on PUBG Mobile.