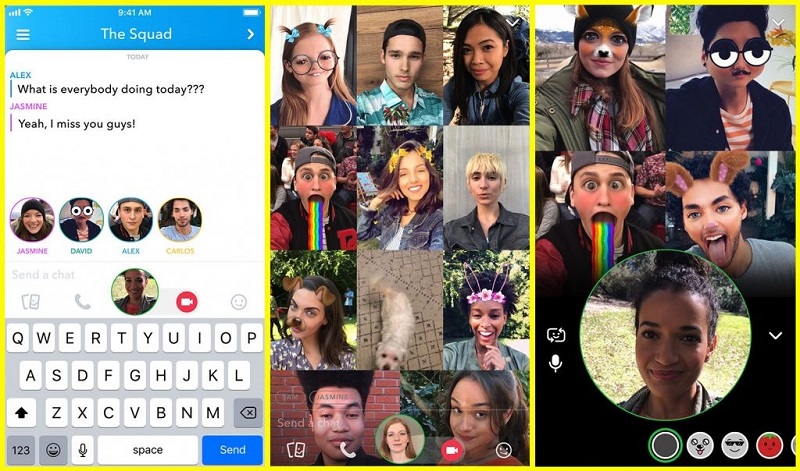 Snapchat is one of the popular apps which allows anyone to have a look at other’s lives through our smartphones. Last month they Explore on Snap Map for its user, which make it is easier to find friends who are roaming around at places without your knowledge. Today Snapchat is rolling out Snapchat Video chat feature, the single video chat at one time can be joined by 16 users. The new update brings a video camera icon in a Group Chat. Snapchat has also restored the GIF stickers from GIPHY which they had removed over a racial slur GIF.

The users in the Group chat will receive a notification inviting them to join and maximum of 16 users can join at a time. The Group video chat has also the option to use Lenses, join only with your voice, or simply send messages that other members can read while they talk.

Along with the Group video chat it also brings back GIP sticker from GIPHY and apologized to its users for the objectionable GIF slip through. They have also confirmed that the bug has been fixed and working on with GIPHY to revamp its moderation systems.

Recently, few months back Snapchat new filters were introduced, to identify what’s in your photo to recommend graphics such as stickers or borders to append on your posts. Snapchat is seriously hoping to win more number of users through initiatives like this. It is one of the platforms that contains exciting user content. So we can rate this move by the company as a smart one.

The group video chat feature will begin rolling out starting this week.

Let us know in the comment section below about the Snapchat Video Chat feature.