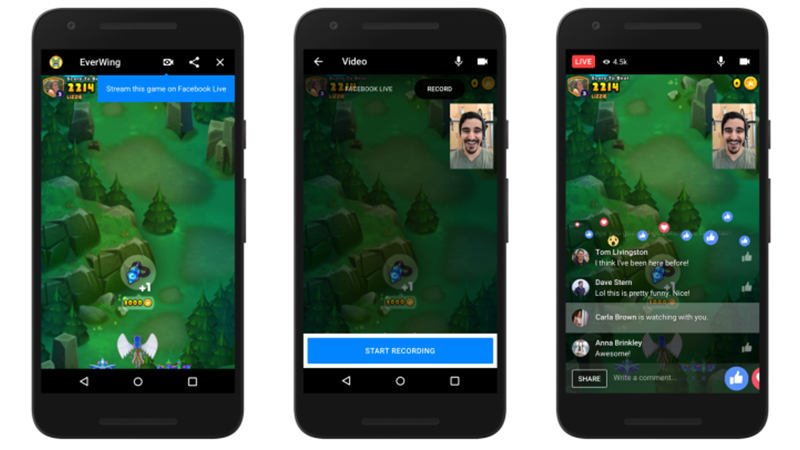 A few weeks ago in November, Facebook launched the Instant Games, a new place for gaming with your beloved members within the Messenger chat application. The social networking firm is also bringing in a couple of exciting new features now for this gaming platform in addition to the support for video chatting with fellow gamers and live streaming via Facebook Live.

The main behind the introduction of the Instant Games is to increase the amount of time spent by the people in Messenger because they will always have something to do. This also brings Facebook back to the world of Gaming. A few years ago, you could find almost every game on the social networking website and I am also pretty sure that you’ve also received a handful of game requests from your friends. In fact, a few games like Candy Crush gained the spotlight through Facebook.

But later, when the company switched its attention to mobile, the gaming plans got fewer and fewer as the time passed on. But today, the smartphones are one of the main mediums where people play the games, thanks to iOS and Android for that and Facebook is just going to make the best out of it.

When the company initially launched the Instant Games, it provided only 20 games in 30 markets with titles such as Words With Friends Frenzy, Space Invaders and Pac Man. This number has now risen to more than 70 games with over 100 developers across the world. Other titles such as Disney Tsum Tsusm, Sonic Jump from SEGA and Angry Birds that’s developed by CoolGames will also be added very soon.

To mark the first anniversary of Instant Games, the company is also launching a couple of new features in it; like video chat and live streaming.

Live Streaming which is already available will allow the Messenger users to broadcast their gameplay to their Facebook profile or Page. To do it, you will just have to tap on the latest camera icon at the top right of the screen during gaming. You can also add a little description along with the post. To begin the recording, press the “Start Live Video” button.

The live broadcasts can be then shared to your facebook page or profile. After it ends, the fans and friends will be able to watch the recording. With this feature, the Facebook is seriously competing with the companies such as Microsoft, YouTube and Twitch.

The social networking giant has also revealed about its plans to add the ability which will let the users to video chat during gaming. It will first be available only with the Zynga’s Words with Friends in next year. The company says that more than 245 million people use the video chatting service on Messenger. Therefore the introduction of the video chat feature will be able to grab new users very easily.

Share us your views on the Instant Games in the comments section below.