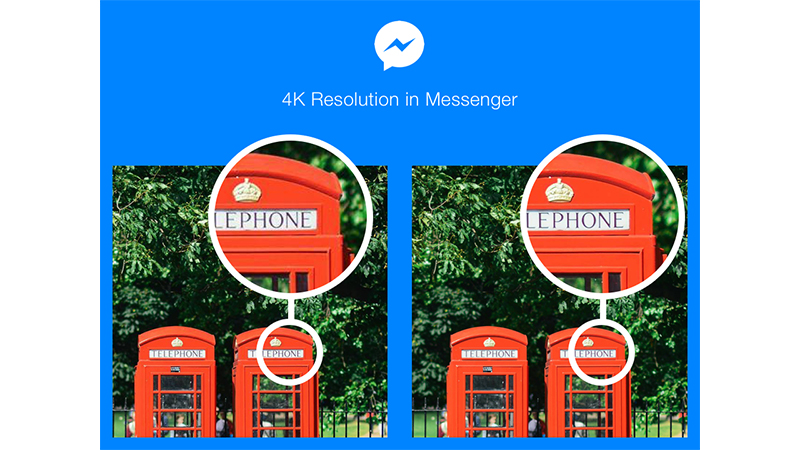 Facebook announced that its popular messaging app, Facebook Messenger now supports 4K images. It means that you will be able to send images to your friends and family members in 4096 x 4096 resolution or the highest resolution that a smartphone can support.

The social networking company stated that around 17 billion pictures are sent via its messaging platform every month and several users have expressed their concerns on they not being able to send photos in higher resolution. The company is not stating whether how many of those images are in 4K, but it does reveal that the users will be able to send 4K photos quickly just like the other resolutions.

It will be very useful for those of you who capture the images in the highest resolution possible. And you will not have to worry about the loss of quality of your photos anymore. That’s why the company needs applause for introducing the much needed feature.

However, you will need to update your app to the latest version which is available on both iOS and Android. The company is rolling out the update currently in South Korea, Japan, Hong Kong, Singapore, France, Australia, the UK, Canada and the US. Facebook will expand this feature to other regions very soon over the next few weeks.

We feel that this feature will definitely win the hearts of those who capture the images in the highest resolution possible. All these days, we had to rely on the email platforms to send the 4K photos in the original quality. With the introduction of 4K support in messenger now, these high quality media can be send easily to our friends and beloved ones in a single click.

Anyways, share us your views in the comments section below.