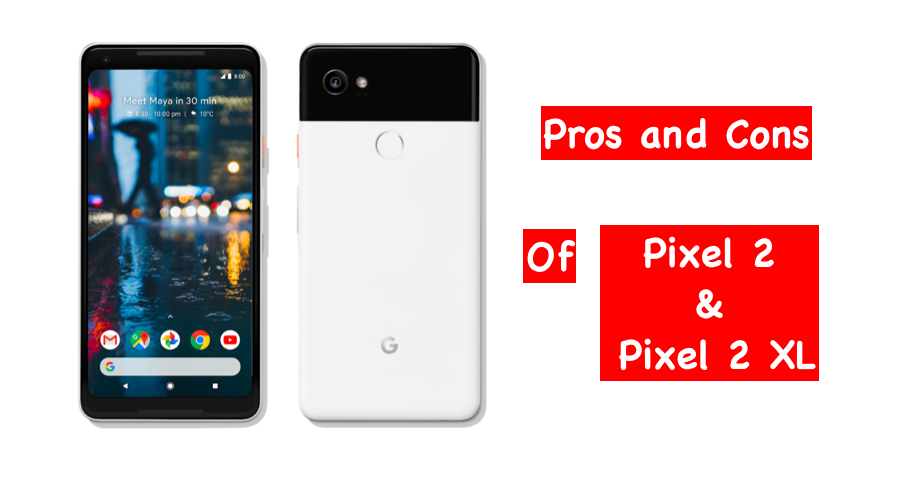 Google announced its latest Pixel smartphones at an event in San Francisco last week. The introduction of the Pixel 2 and Pixel 2 XL is the company’s answer to the current technology and competitions from Apple’s latest iPhone devices and Samsung’s newest high-end smartphones. For Pixel and Android fans, there is no point in even asking whether they have liked the latest dish from the world’s largest search engine. Because they would obviously find the 5-inch and 6-inch Pixel devices better than Note 8 and iPhone X? But are they really better than any other smartphone in the market? You will find answers to those questions in this post.

Don’t miss: Google Drive Offline; How does it work?

Here in this post, we are going to discuss the advantages and disadvantages of the Pixel 2 and Pixel XL smartphones.

Pros and Cons of Pixel 2 smartphones

Let us begin with the advantages of the Pixel 2 smartphones which are listed as follows:

The 12.2-megapixel camera in the Pixel smartphone is better than ever before. Because it makes uses of the latest Google HDR+ feature to bring in more reality to the captured photographs. The f/1.8 aperture works in the best possible way to focus your subject by blurring the background to give you a crystal and clear image with a stunning background blur. The quality of the output is very steadier and you will be able to take better photos even in low light conditions with Optical Image Stabilization.

The Google Assistant is getting smarter day by day. All thanks to the huge user base of the Google and its services by the world. Because any artificial intelligence application would need data to develop itself and the Google knows us more than we know about ourselves. That being said, you will be able to take selfies and play videos on YouTube all by your voice commands.

The Google Lens will provide you information in an interesting way. Just as the name sounds, after launching the application, you can scan any item using the camera and the information about it will be provided to you instantly. You can test this feature currently with things like the poster of a film or the image of a celebrity.

The Always on Displays is a drug for manufacturers like LG and Samsung. And it is interesting to see the Google following this same path. You will be able to view the Time and Notifications instantly and besides that, the Google Assistant is always listening to you. You can ask the Google Assistant to detect any soundtrack you are listening to and ask it to play the video of the same song on YouTube.

The Augmented Reality is still under development and the developers across the world are working on to create or upgrade their applications with the AR support. In that case, you must be about happy to have one of the latest Pixel 2 smartphones, because it supports Augmented Reality.

Google Pixel 2 smartphones run on Android Oreo out of the box in its purest form. This will give you a chance to try on the latest version of Android in the best way possible. In addition to that, the company has also promised to provide guaranteed updates for 3 years.

Don’t miss: Searching unread Emails in Gmail? How to do it easily?

Listed below are the disadvantages of Pixel 2 Smartphones.

The Google has once again implemented a classic design for the Pixel smartphones. But, it is a little boring considering the designs of Note 8 and the latest iPhone devices.

Google is following the ways of Apple by deciding to not integrate the 3.5 mm headphone jack. When Apple decided to kill the headphone jack two years ago, several users expressed their disappointment. So the Google should have continued to stick with the headphone jack because now you cannot listen to songs or place a call using the headphones when you are charging the smartphone unless you also have a Bluetooth headset with you.

When the Note 8 and the latest iPhone devices support the wireless charging, it is disappointing to see it in the latest Pixel 2 smartphones. This gives the competitors like Apple and Samsung to have an edge over the Pixel 2 devices.

There is no optical zoom in the camera. This is a must needed feature especially when you are zooming the subject. Our advice to you would be to move closer to the subject and capture the shots rather than relying on the zooming feature.

These are the Cons of Pixel 2 smartphones.

We hope that this post on Pros and Cons of Pixel 2 smartphones will help you to take a decision whether you want to buy a new Pixel 2 mobile or not. However, let us know your views in the comments section below.