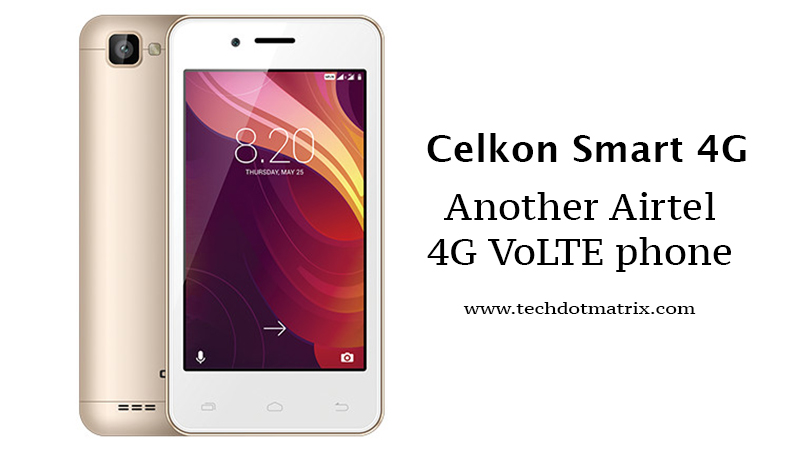 After joining hands with Karbonn to launch a 4G VoLTE feature smartphone that runs on Android, the Airtel has now partnered with Celkon to launch the Celkon Smart 4G VoLTE phone which will support more than 24 Indian languages at an exciting price of Rs 1349. This launch is part of the Airtel’s Mera Pehla 4G Smartphone campaign under which the telecom operator will collaborate with Mobile manufacturers to launch 4G phones at affordable prices.

You can still opt to go ahead without choosing the bundled plan by recharging with any other plan, but if you want to claim the refund, you will have to choose the monthly plan described above. Let’s have a look at the specifications Celkon Smart 4G.

The smartphone sports a 4-inch WVGA touch screen display at a resolution of 800 x 480 pixels.

It is powered by the 1.3 GHz quad-core processor and runs on Android 6.0 (Marshmallow) out of the box.

The device comes with 1 GB RAM and 8 GB internal memory that can be expanded to 32 GB using the microSD card.

It has 3.2 megapixel primary camera with LED Flash and 2-megapixel front camera.

Celkon Smart 4G will be available in all the popular mobile stores in the country and the device will be supported by the Celkon after the purchase in case of physical malfunctions.

Share us your views on Celkon Smart 4G in the comments section below.