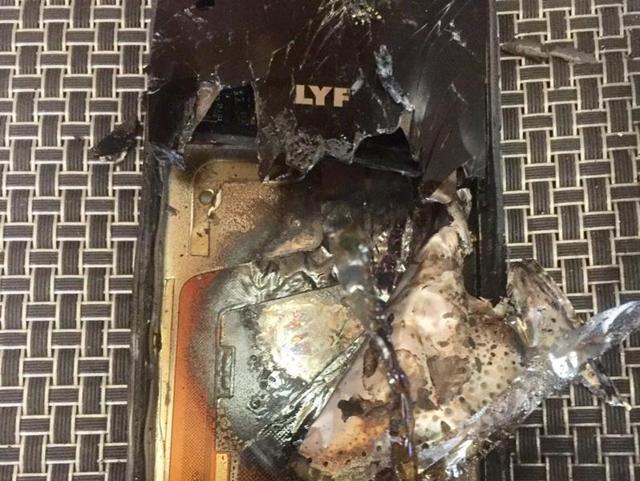 Thanks to the recent explosions, Smartphones are more like grenades these days. The only difference between a grenade and a Smartphone is that while you know when the former would burst, you will not have any idea about when the latter would burn into flames. Lately, Samsung Galaxy Note 7, Xiamoi Mi 4i, OnePlus One grabbed headlines due to its explosions. The latest gadget to get added in the list is a Reliance Jio Smartphone. Yes, a Reliance LYF Smartphone exploded into flames in Jammu Kashmir. 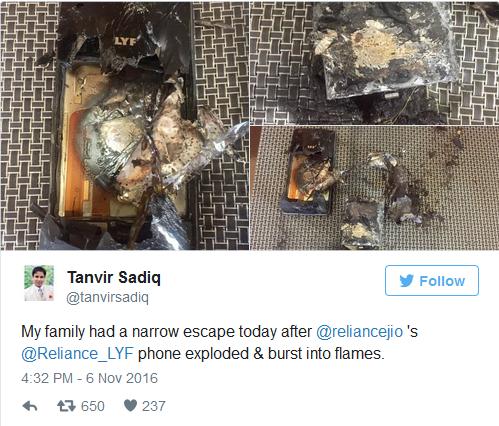 Tanvir Sadiq, who describe himself as a Political Secretary to the working president of Jammu and Kashmir National Conference on his Twitter profile shared in the micro blogging site that his Reliance Jio Smartphone exploded and burned into flames all of a sudden.

The official profile of LYF Smartphone replied to his tweet, “Sorry for the inconvenience caused. Kindly DM us your contact details to assist you at the earliest. As discussed we are investigating on this. We will get back to you with further updates.”

LYF range of phones are designed and manufactured with global standards by some of the world’s leading manufacturers of mobile phones… We are concerned about the incident reported in social media and are taking the matter seriously. We are assessing the cause and will conduct a thorough investigation into the matter.

Let us know if you own a Reliance Jio Smartphone by commenting in the comments section below.