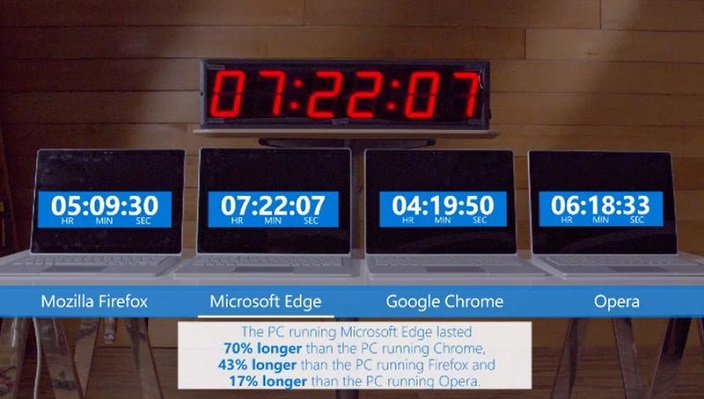 According to Microsoft, its Edge browser is the most power-efficient browser. Redmond demonstrated the claim in four Surface Books and streamed a high-definition video with Firefox, Opera, Chrome and Edge in each one of them. The results were appalling.

The device with Microsoft Edge lasted longer and Chrome, Opera (with battery-saver mode on) and Firefox came in second, third and fourth respectively.

Microsoft said in a blog post, “Microsoft Edge lasted three hours longer than Google Chrome—long enough to finish the final movie in your favorite trilogy, while the competition stalls out halfway through.”

According to Microsoft, “The results speak for themselves: Microsoft Edge outlasts the rest, delivering 17 percent [to] 70 percent more battery life than the competition.”

There are dozens of improvements coming up in the upcoming Windows 10 Anniversary update that includes an optimized user interface and networking, Flash running in a separate process and more efficient background tabs.

Let us know your favorite browser in the comments section below. We would love to hear from you.

Also Read: Windows Holographic by Microsoft to be opened to VR makers