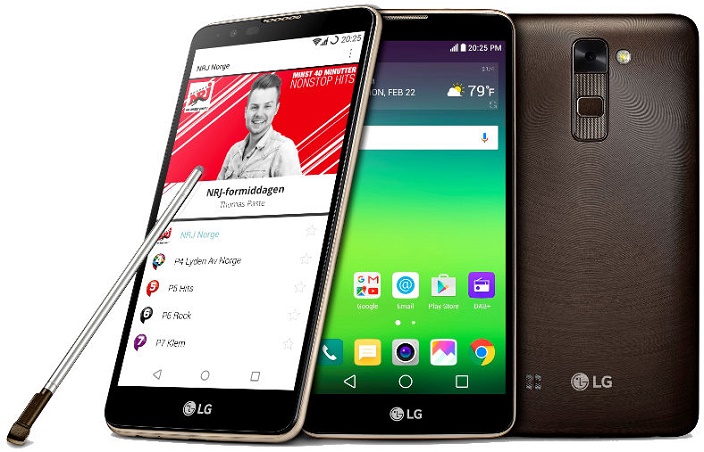 A new Stylus 2 variant from the family of LG is the first Smartphone in the world to feature DAB+ for Digital Radio Broadcasting. The company showcased the new Smartphone at Radiodays radio conference at Europe 2016 in Paris. DAB+ technology in the new LG Stylus 2 is a result of a collaboration of LG and International DMB Advancement Group (IDAG).

The Smartphone has a DAB+ chipset and an exclusive app which will allow you to experience digital radio broadcasts.

The company said, “A technical interface also enables broadcasters to develop their own tailored apps in which internet services complement broadcasted radio. Users will be able to access more radio channels with DAB+ than traditional FM. Unlike regular radio apps that stream large amounts of data, DAB+ radio provides excellent audio quality for free, as it uses no data.”

LG Stylus 2 sports a 5.7-inch HD IPS in-cell display at resolution of 1280 x 720 pixels. It is powered by a 1.2 GHz Quad-Core processor and 1.5 GB RAM. The Korean variant has 2GB RAM. The device is packed with 16 GB internal memory which can be expanded using a microSD card. LG Stylus 2 runs on Android 6.0 (Marshmallow) and has 13 MP Primary Camera and an 8 MP Selfie Camera.

The new LG Stylus 2 will be first available in United Kingdom, Norway, Netherlands, Belgium, Italy, Germany and Australia. The company hasn’t disclosed the details regarding the price of the device yet.

Let us know your views on the latest LG Stylus 2 Smartphone in the comments section below.