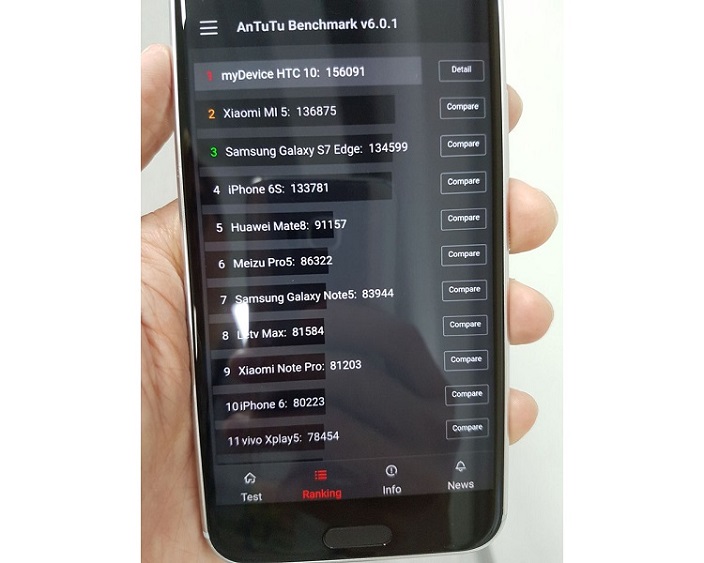 As usual, we are witnessing a lot of hype before a HTC event. Yesterday the company clued that its upcoming flagship, HTC 10 would sport a BoomSound Technology. Today, another leaked image of the Smartphone’s Antutu benchmark score is going viral in the web around the globe.

The leaked image claims HTC 10 to get a AnTuTu benchmark score of 156091 which is way past the other similar flagships such as Huawei Mate 8, iPhone 6S and Samsung Galaxy S7 Edge.

As far as the leaked images of the Smartphone are concerned, it features a fingerprint sensor near the physical home button. The company has not revealed much regarding the specifications of the device.

However, The device is expected to sport a 5.15 HD display at a resolution of 1440 x 2560 pixels, powered by 4 GB RAM, Qualcomm Snapdragon 820 processor and Adreno 530 GPU. It is also expected to support USB Type-C port and feature a 12 MP primary camera. However the company has already revealed that its upcoming Smartphone will have “World First, World Class” back and front cameras.

For those of you who are die-hard HTC fans, you will have to wait only for a few more days till April 12 to know more about the Smartphone.

Also Read: HTC is all set to launch its HTC 10 Smartphone on April 12