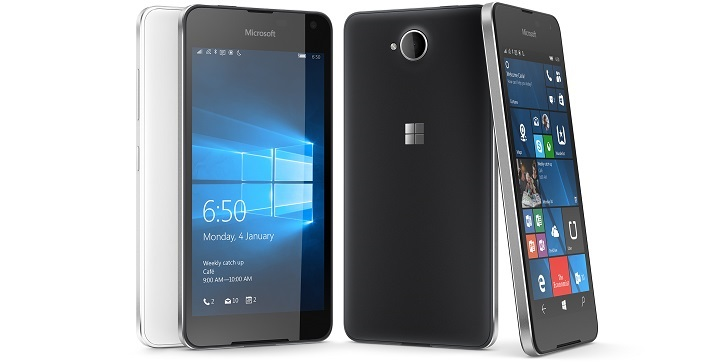 Microsoft launched its latest Windows 10 Smartphone, Lumia 650. Unlike its predecessors, Lumia 650 is cheaper and costs only $199. The device is aimed at increasing the reach of Windows 10 in a high competitive market which is dominated by Android and iOS.

Lumia 650 sports an AMOLED display with a resolution of 1280 x 720 pixels. It is powered by 1 GB RAM and a Qualcomm Snapdragon 212 processor which is clocked at 1.3GHz. The device has a 2000mAh battery and an in-built storage of 16 GB which can be expanded up to 200 GB using microSD slot.

While the Primary Camera offers 8 MP resolution, the Selfie camera can be used to click images in 5 MP. As the Windows Smartphones are known for its Camera quality, Lumia 650 can also be used to click great photographical images.

Although the device is covered by an aluminium frame, Lumia weighs only 122 grams and has a thickness of 6.9mm.

Windows 10 by Microsoft is said to bring true convergence across devices. Earlier in January, Microsoft announced that Windows 10 now has more than 200 million users. But, unless the Windows 10 grabs more mobile users, the convergence plans of Microsoft will be a failure. Therefore, we can expect Microsoft to launch more Windows 10 at a budget price in this year.

But there are also rumors that this could be the last Lumia Smartphone.

As far as the specifications of the Smartphone are concerned, Lumia 650 is a decent Smartphone that comes at a budget price. But, the device is unlikely to make a huge impact in the market considering the domination of other leading mobile Operating Systems such as Android and iOS.

Let us know your views on Lumia 650 in the comments section below.

Also Read: Lenovo to launch a Smartphone at MWC 2016, and it is very gorgeous