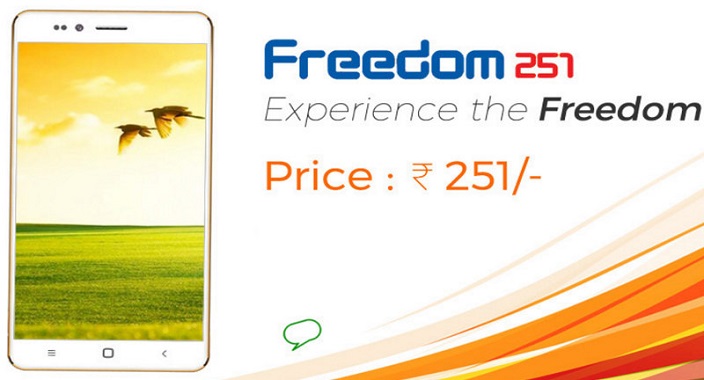 You can not only spend 250 bucks to watch a movie in IMAX in India, but also buy a smartphone. Yes, the Ringing bells launched Freedom 251, the cheapest smartphone in India and it is available for 251 Indian Rupees.

Ringing bells also holds the record for launching the cheapest 4G smartphone, Smart 101 which was launched very recently at a price of INR 2,999. The company also stated that its ventures stand by the vision of Narendra Modi, the Prime Minister of India, “empowering India to the last person, transforming India’s growth story”.

Freedom 251 by Ringing Bells sports a 4-inch qHD IPS display at a resolution of 960 x 540 pixels. It is powered by 1 GB RAM and Quad-core processor which is clocked at 1.3 GHz. The Smartphone comes with an internal memory of 8 GB and is expandable up to 32 GB using microSD. The device runs on Android 5.1(Lollipop).

Freedom 251 has a 3.2MP primary camera and a 0.3 MP selfie camera. Unlike the Ringing Bells’ Smart 101 which supports 4G, the Freedom 251 supports only 3G and boasts GPS, Bluetooth and WiFi 802.11 b/g/n. The battery is only a meagre 1450 mAh. But considering the price of the Smartphone, it is packed with a set of features beyond our expectations.

The official launch of the device is set to take place in Delhi on February 17, 2016 and the device will be available for sale through freedom251.com from 6 AM on February 18, 2016. Freedom 251 also comes with a one-year warranty.

Therefore, all thanks to Ringing Bells, buying a Smartphone is only 251 rupees away in India.

Let us know in your views on Smart 101 in your comments below.