Facebook might come up with a dedicated Messenger for the Mac users. A photo in which one of the employees of Facebook using this app was leaked online with a purported eye-witness report.

According to John Constine of TechCrunch, “TechCrunch has obtained photographic evidence and an eyewitness report that Facebook has built an as-yet-unreleased Facebook Messenger for Mac desktop app”. The UI of the app that was spot has an interface that matches much like the one which Messenger app has for iOS users. 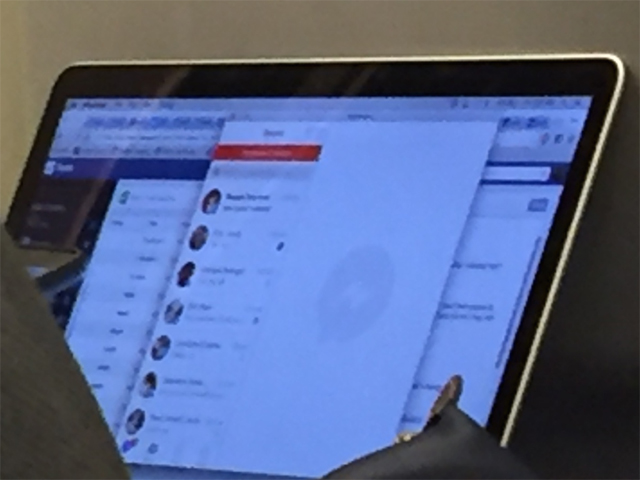 We have earlier reported on how to use Facebook messenger on a computer. Instead of installing a dedicated app, you can log into www.messenger.com and use the Messenger. While it helps the user by preventing an installation that occupies additional space in the storage device, using Messenger this way is a little bothersome as you’ll have to switch between the browser tabs or browser windows every time you want to use the Messenger. This app instead would make things easy as it would certainly let the user to use the messenger from the dock.

The company hasn’t commented on the news yet and therefore we cannot guess whether when this app will be launched or whether it is going to be launched at all. On the other hand, all we can say now is that it would add more numbers to the list of installations as the service has over a billion users around the globe.

Facebook had earlier released a Messenger app for PC users of Windows operating system in 2012. As the time went on, Facebook started paying less attention towards this app and the app was eventually shut down in March 2014 with a statement from the company saying “We’re sorry, but we can no longer support Facebook Messenger for Windows, and it will stop working on March 3, 2014.” The windows users can however install the messenger app from the Windows App store and still use it. But you will have to be a Windows 8, Windows 8.1 or Windows 10 user to avail this service.

Finally, 2016 is going to be an exciting year for Facebook as the company has plans from messenger to virtual reality under its shelves.