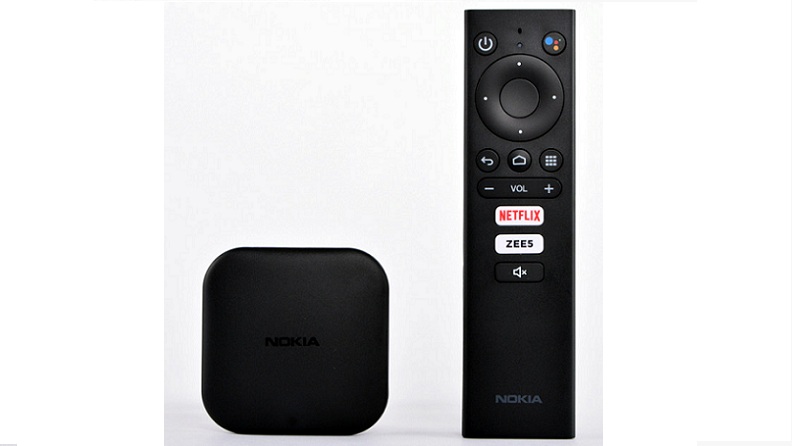 Nokia Media Streamer running Android 9.0 OS launched in India by Flipkart for televisions. This device has built-in Chromecast feature that let user cast content from other devices easily and it also supports Google Play Store. The Nokia media streamer has a dedicated remote, offers full HD 60fps playback, Dolby Digital Audio and a voice-controlled remote with Google Assistant. It will connect to your television through the HDMI port, also comes with dual-band Wi-Fi and equipped with a multi I/O antenna for better reception.

The Nokia Media Streamer also has hotkeys for ZEE5 and Netflix. It’s likely that Netflix and Zee5 will come pre-installed on the Nokia Media Streamer, along with other core Google apps such as YouTube and Google Play Movies. It has 1GB of RAM and 8GB of internal storage for apps and app data.  It is powered by an unspecified quad-core processor along with a Mali 450 GPU

We are excited that Flipkart, the leading e-commerce company in the country, is bringing cutting-edge home entertainment to consumers in India with the Nokia Media Streamer, strengthening our strategic relationship. The Nokia Media Streamer is the perfect complement to Flipkart’s range of Nokia Smart TVs, offering Indian consumers a premium viewing experience to enjoy their favorite movies and TV shows.

The Nokia Media streamer device has 1080p up to 60 frames per second.

It is powered by Quad core processor with Mali 450 GPU and runs Android 9.0.

The device comes with 1 GB RAM and 8GB storage.

On the front side it has 5MP front-facing camera with f/2.4 aperture.

The Nokia Media Streamer is priced at Rs. 3499 and will be available from Flipkart starting from August 28th.

Share us your views on Nokia Media Streamer specifications in the comments section below.