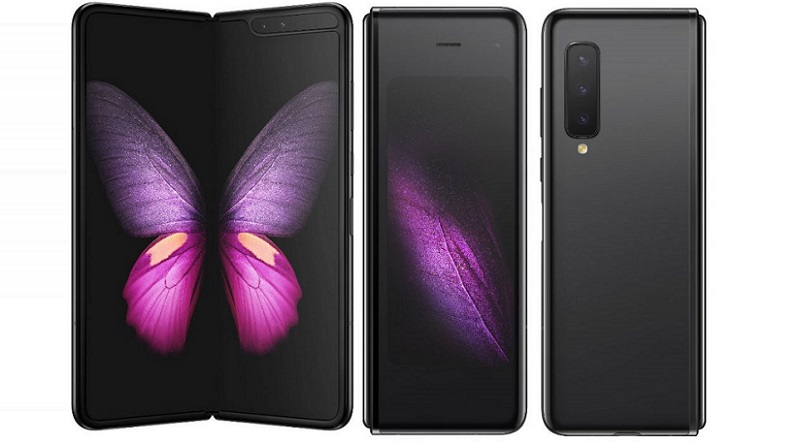 Samsung has officially introduced the largest-ever smartphone display, which is a foldable smartphone called as Samsung Galaxy Fold at its Unpacked event. The Galaxy Fold has a 7.3-inch QXGA+ Dynamic AMOLED 4.2:3 aspect ratio Infinity Flex display. And, it can be folded into a compact device with a 4.6-inch HD+ Super AMOLED 21:9 aspect ratio cover display. It is powered by Snapdragon 855 with 12GB of RAM and runs Android 9.0 (Pie). It has Side-mounted Fingerprint Sensor where the thumb naturally rests, so the device unlocks easily and features engraved hinge with Samsung logo complete its elegant fit and finish.

Samsung says that it has been in development over eight years following the debut of Samsung’s first flexible display prototype in 2011. The Samsung Galaxy Fold phone has a hinge with multiple interlocking gears housed in a hidden enclosure for a seamless closing and opening, and elegant look. A new polymer layer makes the display around 50% thinner than the typical smartphone display, as well as it also makes it flexible and tough, built to last.

The Multi-Active Window lets you open up to three active apps simultaneously on the main display so you can surf, text, work, watch and share easily. It also has new UX with several features such as App Continuity so apps will automatically show up where you leave off when you open and close the display.

It features triple rear cameras as well as dual front cameras along with a 10MP camera for the front cover display. It has two batteries for a total of 4,380mAh battery and comes with support for wired and wireless fast charging.

It also comes with 10MP cover camera with f/2.2 aperture.

The mobile packs 4,380mAh battery with fast Charging both on wired and wireless (WPC and PMA) charging.

The Samsung Galaxy Fold is priced at US$ 1,980 (Rs. 1,40,760 approx.) for the 5G version. While 4G version will also be available but price has not been revealed yet. It comes in Space Silver, Cosmos Black, and Martian Green and Astro Blue color. It will be available in the U.S. through AT&T and T-Mobile starting April 26th.

Share with us your views on Samsung Galaxy Fold smartphone in the comments section below.