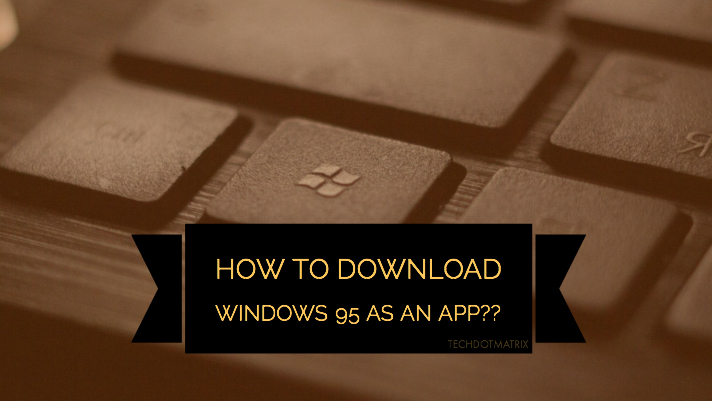 Technology has evolved drastically over the past 20 years. Back in the year of 1995, only a few people were able to access the internet. And that was the time when the world was relying on floppy disks and several other such accessories which are not even in the market today. Around that period in the 90s, Microsoft launched its Windows 95 operating system. This launch paved way for several changes over the next two decades and today we are making wonders through these operating systems.

Windows 95 might be the first Disk Operating system that several of us have used. In that case, we can clearly say that it is not less than a revolution. Anyways, several versions of Windows have been released and ended later since then. But have you ever thought of how it would be like to use Windows 95 today?

If you also have the same thought, then you should thank a developer Felix Rieseberg who has created a Windows 95 app which is available on Linux, macOS, and Windows. According to its billing, the app is in the form of a downloadable application.

I put Windows 95 into an Electron app that now runs on macOS, Windows, and Linux. It’s a terrible idea that works shockingly well. I’m so sorry.

The application which is sized at only 129 MB occupies only around 200 MB of RAM when it runs. The Windows 95 app will also let you use programs like Minesweeper, WordPad and MS Paint within it.

If you are someone who has used Windows 95 in the past, we would suggest you to try installing this app by clicking on this link. It might remind certain good memories of that era of your life. At the same time, others who are part of the current smartphone generation can also have a look at the technology from 20 years ago by using the Windows 95 app.

We hope this post has helped you bring back those old nostalgic memories from your past. However, share us your views and queries on the way technology is advancing day by day in the comments section below.