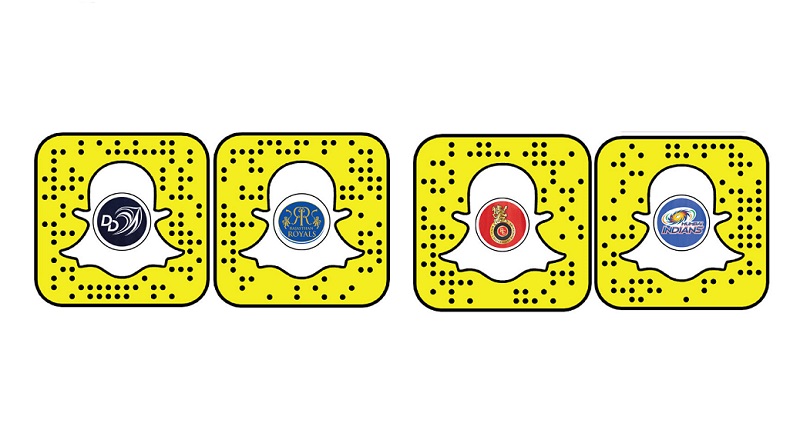 The Indian Premier League (IPL) which is a professional Twenty20 cricket league in India has kickstarted. As, it is the most-attended cricket league in the world and only sport event to be broadcast live on YouTube. Seeing the opportunity Snapchat has announced a partnership with four IPL teams; Mumbai Indians, Royal Challengers Bangalore, Delhi Daredevils and Rajasthan Royals. These IPL teams have joined the Snapchat platform as Official Stories.

This is the first time Snapchat is partnering with India’s largest sporting event. A new creative tools such as custom Stickers, Filters, and Lenses have also been released by the company. The Lenses transform you into a helmeted player, with the team anthem playing in the background. These are available automatically in each team’s state or by scanning a Snapcode in Snapchat.

The company also says that Snaps created by these official team accounts will be featured in the Discover section of Snapchat, and will provide glimpses of the action that you won’t be able to.

We love finding new ways to make Snapchat a great place for fans. We are so excited for Snapchatters to be able to catch behind the scenes action by their favorite players, cheer their teams and share in the IPL 2018 frenzy with their friends and family!

Snapchat is one of the popular apps which allows anyone to have a look at other’s lives through our smartphones. Last year they introduced a new app, Snap Map by Snapchat that helps you to meet your friends in real life by sharing the current location. And, few weeks back they introduced Explore on Snap Map for its user, which make it is easier to find friends who are roaming around at places without your knowledge.

Snapchat is seriously hoping to win more number of users through initiatives like this. It is one of the platforms that contains exciting user content. So we can rate this move by the company as a smart one.