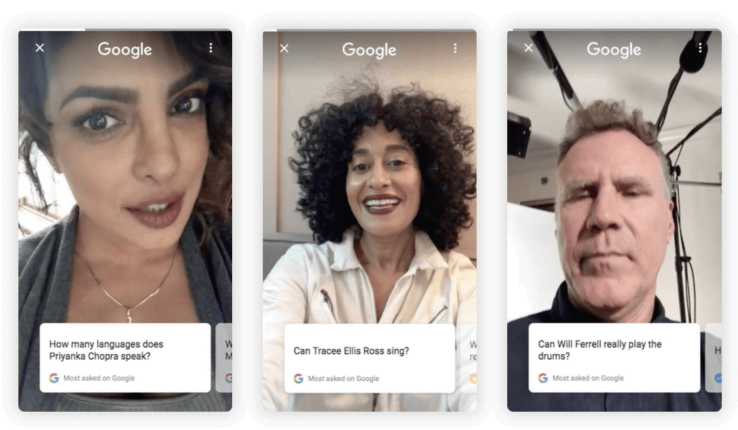 Google has launched a new feature that shows Google celebs videos answering user questions upon search result. This program has been launched as of now only on mobile with few celebrities who has posted their pre-recorded video selfie in response to the already known questions searched by user in Google Search Engine.

The celebs who have posted the selfie video includes Gina Rodriguez, Will Ferrell, Kenan Thompson, Tracee Ellis Ross, Priyanka Chopra, Allison Williams, Dominique Ansel, Nick Jonas, James Franco, Mark Wahlberg, Seth MacFarlane and Jonathan Yeo. It is evident that with this launch, Google is focusing on its search engine to work more like a social product.

When user search for one of these queries like “How many languages does Priyanka Chopra speak?”, “Can Tracee Ellis Ross sing?” or “Can Will Ferrell really play the drums?”. The videos selfie will appear above Google standard set of blue links as answer on top of the search result. The video results appearing in the Android Google app right now, the iOS Google app will be rolled out later as confirmed by Google.

You can either choose to swipe through Google celebs videos yourself or the carousel automatically switches to the next one in the celeb’s series of Q&A’s after watching the first video.

While Google has always been coming with new updates and features like recently Google Go search app launched to provide faster & unified search results. This new feature is certainly going to add more edge to the best search engine. It is evident that Google is trying to make its search engine itself more like a social platform with this new launch.

Let us know your views on this new feature of Google search results to show Google celebs videos answering your questions.