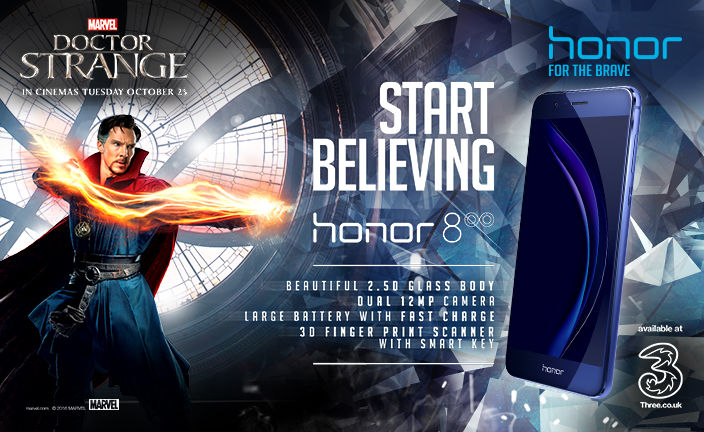 Honor has joined hands with Marvel Studios for its upcoming Doctor Strange movie which stars Benedict Cumberbatch in the lead role. To mark the celebration, the company has announced that it will give the fans a chance to get their hands on the limited edition Honor 8 Smartphones imprinted with the Eye of Agamotto from the launch of the film.

Besides that, the company is also giving the customers to grab two movie tickets for Doctor Strange on October 25th and four Marvel movie downloads courtesy of Honor and Three. The fans will be able to enter the promotion when they buy an Honor 8 Smartphone via Three, the exclusive network provider of Honor gadgets. The promotion offer began already on October 3rd and will go on till November 30, 2016.

Honor 8 sports a 5.2-inch LTPS capacitive touchscreen display at a resolution of 1080 x 1920 pixels with 423 ppi pixel density. It is powered by Octa-core kirin 950 processor with Mali-T880 MP4 GPU and runs on Android 6.0 (Marshmallow). The device comes with a massive 4 GB RAM and 32/64 GB internal storage capacities which can be expanded up to 256 GB using microSD.

It has a 12 MP primary camera with dual-LED flash, laser autofocus and an 8 MP Selfie camera with 1.4um f/2.4 aperture. The gadget is packed with compass, proximity, gyro, accelerometer and fingerprint sensors on board to provide a great user experience. It comes with Dual SIM and supports A-GPS, GLONASS/BDS, Bluetooth 4.2, Wi-Fi 802.11 a/b/g/n/ac dual-band, NFC, USB Type-C and 3.5mm audio jack with DTS sound and Active noise cancellation with dedicated mic.

The Smartphone relies on a 3000 mAh battery to provide a decent Smartphone experience.

Honor 8 will be launching in India on October 12th. Stay tuned for more details.