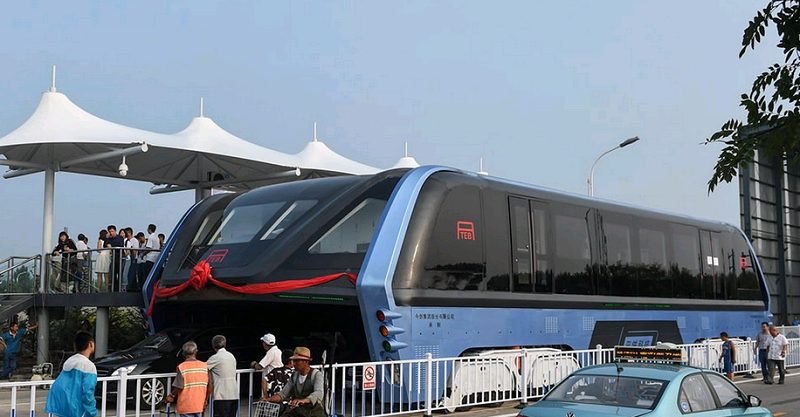 China has unveiled its ambitious proposal for a hybrid train/bus thing that can travel over traffics. You would have also probably seen some random concept videos on any social media or Facebook. While watching that video I thought it is an amazing idea, but would never make it to the reality. But, China has proved us wrong as they have finally built the Transit Elevated Bus (TEB) which is able to glide over cars on the road.

Check out the video of China’s futuristic bus that drives above cars:

Today China Xinhua News reported its first road test. It happened in Qinhuangdao City, to evaluate the power consumption and braking test of the vehicle. This TEB is powered by electricity, is about 22 meter long, 7.8 meter wide and 4.8 meter high. The passenger compartment of this futuristic public bus rises far above other vehicles on the road allowing cars to pass underneath thus, designed to maximize the use of road space. It can carry 300 passengers as of now, but future versions could probably be coupled together to use it as a Metro.

Although, this version still isn’t ready for mainstream daily use but sure China would actually start using it soon and other countries like India also need it on the road.