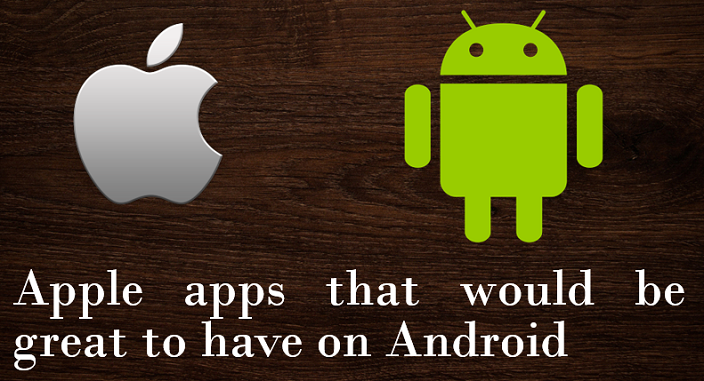 Apple apps are known to be used exclusively in Apple devices such as iPhone, iPad and Macbook. The company made a small break from its tradition by introducing its much popular Apple Music for the Android users. And the buzz is that more Apple apps would make its way to the Android platform. According to certain reports, Apple CEO Tim Cook hinted recently that more apps from Apple will find the way to Android in addition to the Apple Music for Android.

But, the good news is that we won’t have to rely on third party apps anymore. Because more apps from the family of Apple are expected to be seen in the Google’s PlayStore very soon and it triggered us to create a list of cool Apple apps to have on Android.

iMessage by Apple is one of the best available online Messaging apps. But at present, it is available only for Apple users. Although it works much like other instant messaging services like WhatsApp which is available in all platforms, it’d be cool to have an iMessage app by Apple in Android. Introduction of iMessage app in Android will definitely fetch a lot of users from other IM services.

Music Memos is known for the functionality that it offers to create music. Both the professionals and the amateurs in the music world use this app to learn and create music. Unlike the other difficult apps, Music Memos offers a simple and cool UI to make music. At present, no any app from the Google PlayStore can be said to be on par with the Music Memos, therefore, adding this app in Android would certainly pave the way for tons of installations.

Apple Maps, when launched was known for a lot of bugs. But the app has developed a lot over the years. Therefore, this app will definitely be a challenger to the existing Google Maps on which the Android users rely on for the updates on routes and traffic.

Unlike the apps mentioned above, this app might not fetch a lot of users as the Android users already have Google Drive. But addition of iCloud in Android can be helpful for the users who want to sync files across their Apple and Android devices.

Let us know in your comments if we have missed any of your favorite apps in the list.