Skype introduces group video calling feature for its mobile apps in an announcement through its official blog to mark its 10 year anniversary.

The video calling feature of Skype made its first entry into the mobile platforms 6 years ago. Although other services like Google Hangouts have been offering the group video calling feature for some time now, Skype still stood as the most favorite Social app for communication among the users. The figures say that the Skype stands way ahead than other similar services like Google Hangouts both in PlayStore and Apple’s iTunes Store.

Google Hangouts allows up to 10 people to join in its group video calls at once. There is no news yet on how many members can participate the group video calling in Skype. At the same time, there is also no news on whether when this feature is going to be launched globally.

However, if you aren’t patient enough to wait till a global release, you can avail this service through a pre-registration. All you will have to do is just fill the pre-registration form with details like your Skype name, email address, country and device and hit “Pre-register”. Therefore, we can assume that the Skype will send a link to download the beta version of the app with the group video calling feature. 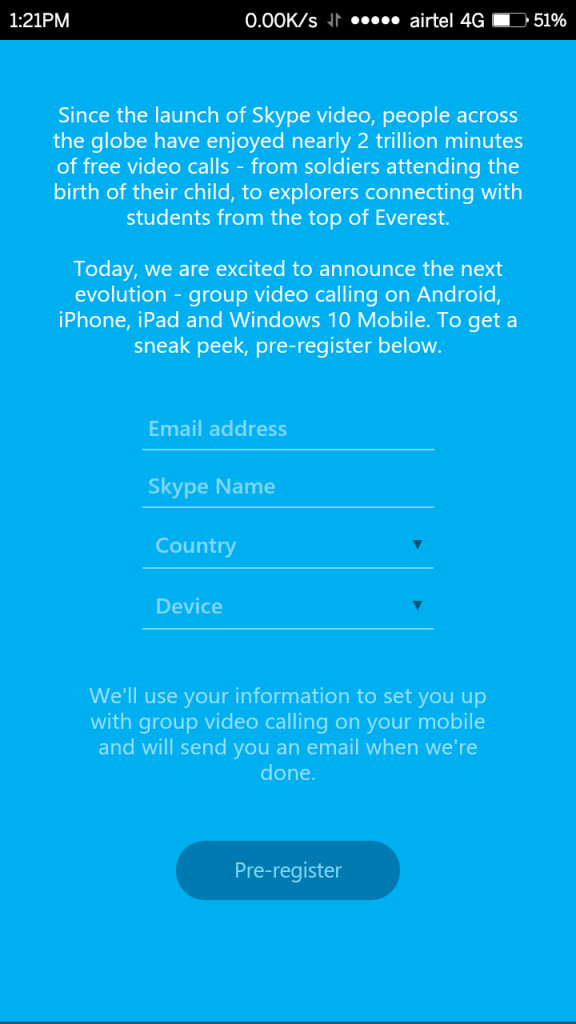 Although, Skype has been providing video calling and other chat services for a long time, we cannot deny the fact that it became more popular after Microsoft’s acquisition of the company in 2011. But Skype has made tremendous progress by introducing features like real-time speech, video messaging and instant message translation and also has its own version of emojis unlike the other apps. Skype is also popular in the Business field as it has replaced Microsoft’s Lync in many leading organizations for communication among employees.

And therefore, Skype will continue to grow as several exciting features are awaiting the users.